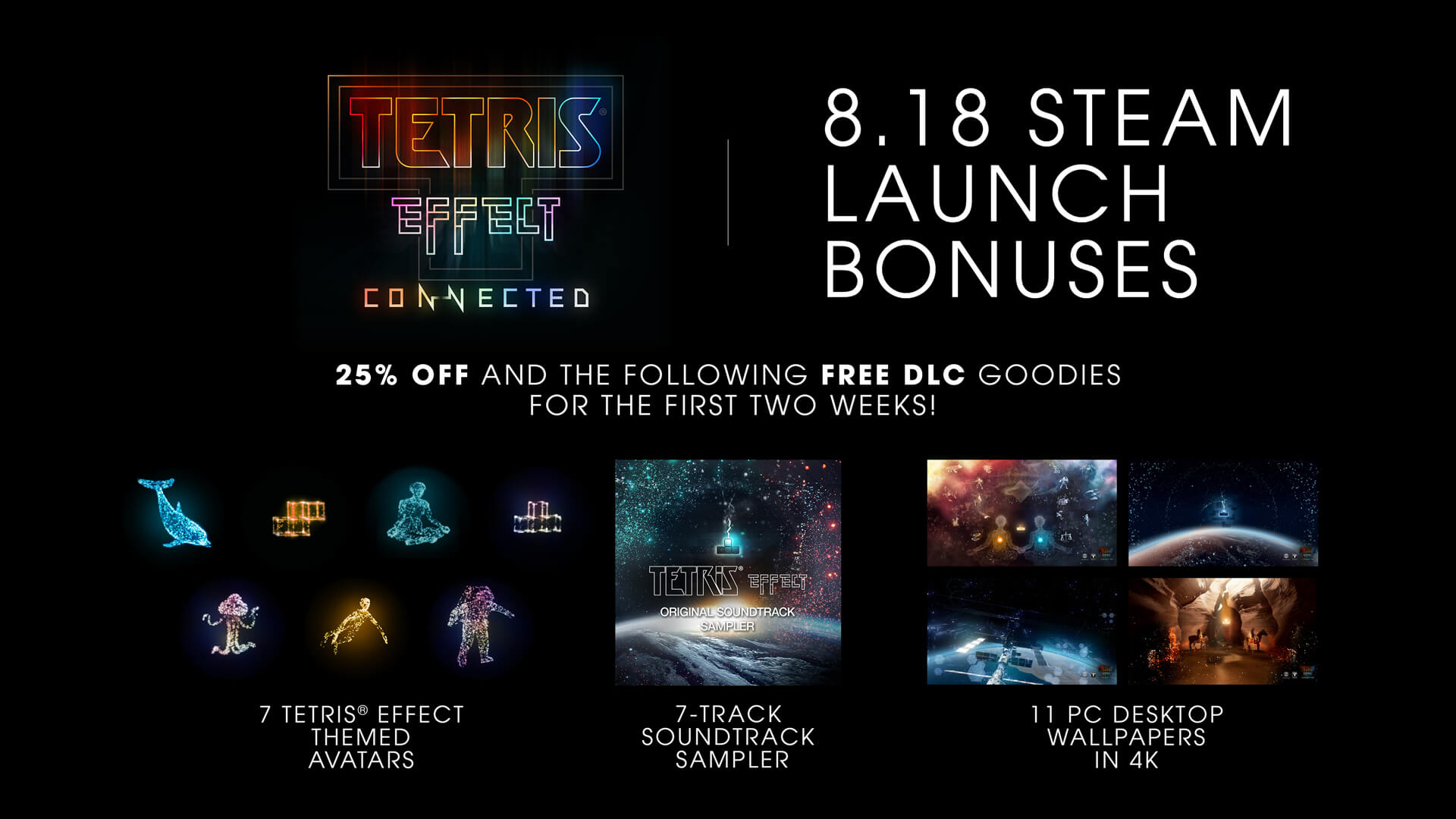 STEAM VERSION DISCOUNT / DIGITAL DELUXE DLC:
To celebrate Tetris Effect: Connected’s long-awaited debut on Steam, the game will be offered at a 25% discount for the first two weeks, along with the following “digital deluxe DLC” at no extra charge: 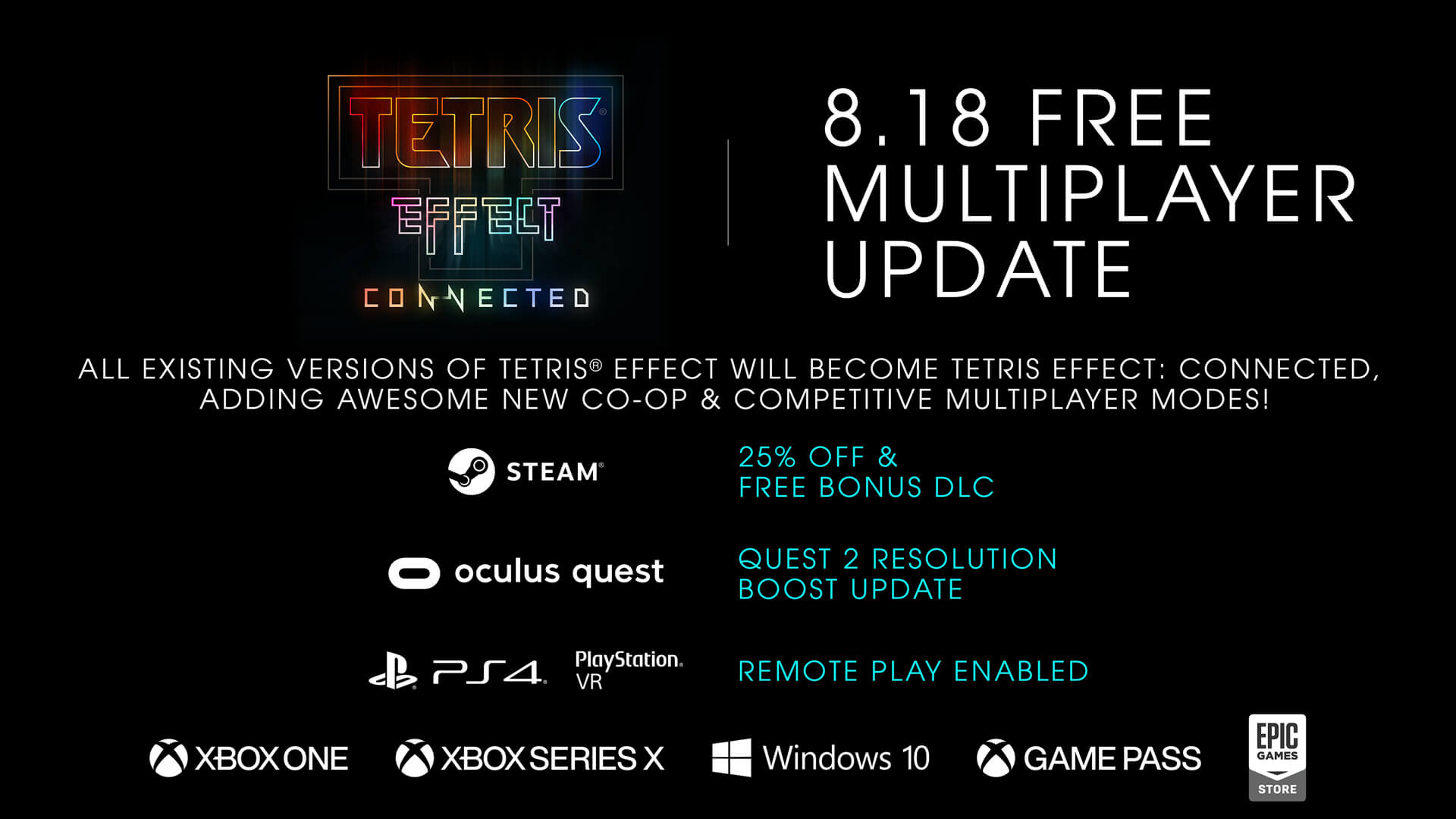 UPDATES COMING TO ALL VERSIONS OF THE GAME ON AUGUST 18 (more details below list): 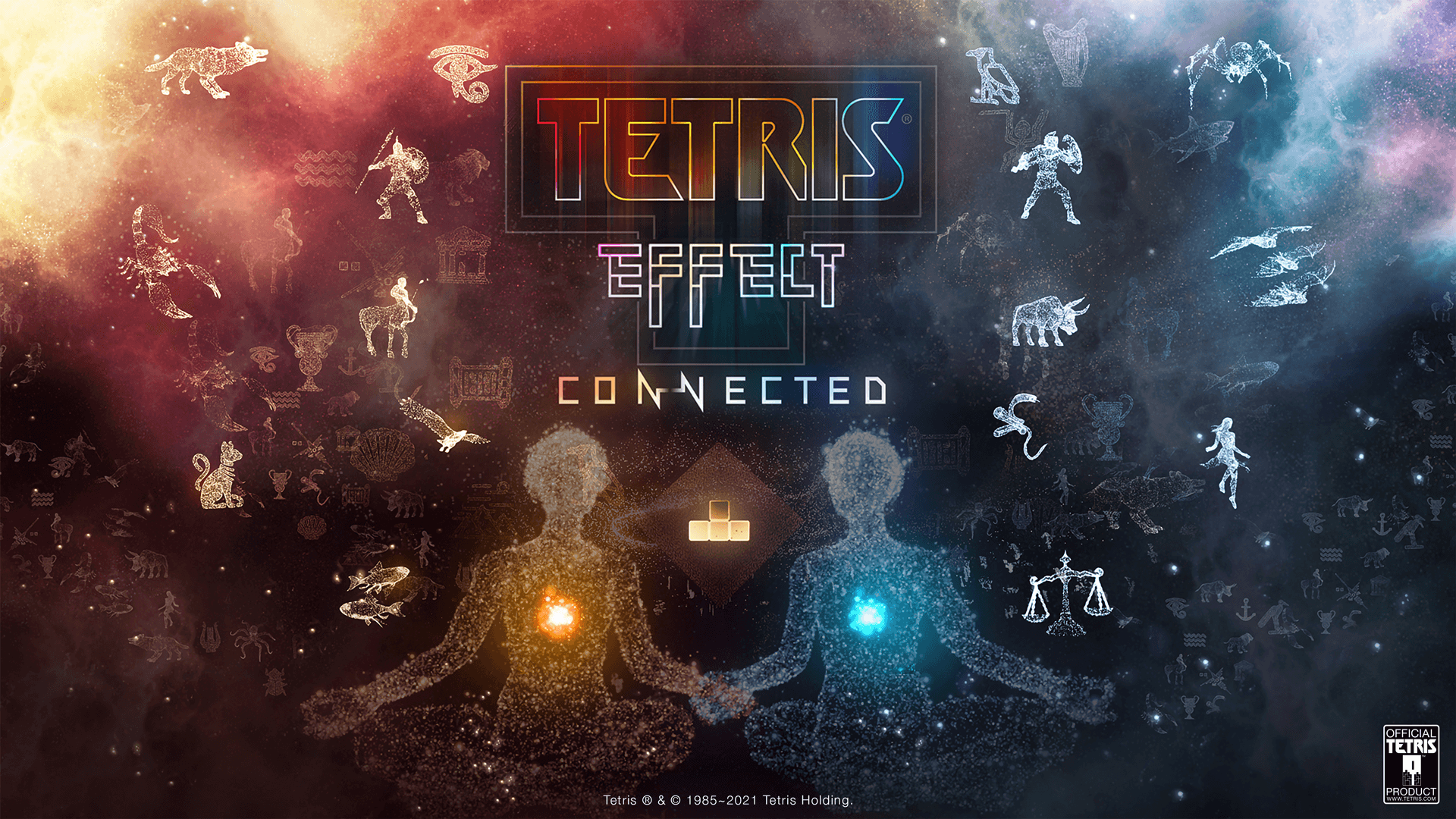 CROSS-PLATFORM PLAY
Furthering the game’s goal of bringing people together in cooperation and competition, the Tetris Effect: Connected update will allow Friend Match players to invite owners of the game on other platforms to all play together, via a simple, shareable 4-digit alphanumeric “Room ID” code. (Of course players can also invite others on their same platform directly via that platform’s native invite system as well.)

In addition to breaking down barriers between friends, wherever they might choose to play, cross-platform play will maximize the player base for Ranked Matches, ensuring better matchmaking and more equivalent competition for players at all levels.

Display of the Room ID can be disabled for those streaming their matches who wish to keep it private, and all platforms have the option of limiting themselves to players of their same platform. (Note: progress and achievements will not be shared across platforms.)

BONUS FEATURES
Spectator Mode (Friend Matches Only): The Tetris® Effect community’s #1 most-requested feature! Between 4 and 6 additional players, depending on the multiplayer mode, can join a match to watch as spectators (and emote from the sidelines in real-time), adding flexibility and convenience for anyone hoping to run or stream tournaments, or simply making it easier to drop in and out of games with a group of friends.

PAL Speed (Classic Score Attack Mode, Friend and Local Matches Only): A new option designed to replicate the feeling of the European PAL format of the Tetris game from the Nintendo Entertainment System, including a lower framerate, faster horizontal movement, and faster dropping speed in later levels.

Slow Speed (Zone Battle Mode, Friend and Local Matches Only): The flip-side of the Hyper Fast mode, this option, well, slows things down, with a longer entry delay for new Tetriminos, slower Line Clear speeds and slower horizontal movement. Helpful both for beginner players and also for advanced pros who can use the delay for more effective stacking and more devastating Zone Attacks.

ABOUT TETRIS® EFFECT: CONNECTED
Check out the Intro to Tetris Effect: Connected by aGameScout who explains the Multiplayer modes.

Among the new modes is the titular Connected, where three players can team up and literally connect their Matrix play fields to fight against A.I.-controlled Bosses; Zone Battle, a one-on-one match of standard competitive Tetris, but with a twist: the time-stopping Zone mechanic (first introduced in Tetris Effect’s single-player game); and Score Attack, a “single-player versus” mode, where two players compete separately to see who can get the best score.

Also included is a special variation on Score Attack mode, Classic Score Attack, which brings back the look and feel of Tetris from when it was first introduced to console gamers over 30 years ago. More than just a nostalgic coat of paint, Classic Score Attack recreates the old school controls and settings, including the removal of Hard Drop and the Hold Queue, Tetriminos Lock Down immediately when they touch a surface, and random Tetrimino generation. The mode also pays homage to a standard of “Pro” Tetris competition popularized by the Classic Tetris World Championship, an annual fan event that brings together some of the top Tetris players from all over the world.

The new multiplayer expansion joins the 10-plus single-player modes already included in the original Tetris Effect. This is Tetris like you’ve never seen it, or heard it, or felt it before—an incredibly addictive, unique, and breathtakingly gorgeous reinvention of one of the most popular puzzle games of all time, from the people who brought you the award-winning Rez Infinite and legendary puzzle game Lumines. Music, backgrounds, sounds, special effects—everything, down to the Tetriminos themselves, pulse, dance, shimmer, and explode in perfect sync with how you’re playing, making all of the game’s 30+ stages something you’ll want to experience over and over again.

Development is being handled by the same team of Monstars Inc. and Resonair as the original Tetris Effect, with additional coding and networking help from Tokyo-based Stage Games.