TOKYO, Japan – Nov. 18, 2019 – To celebrate the 1st anniversary of the November 2018 debut of Tetris® Effect on PS4 and PSVR, Enhance announced today a partnership with Limited Run Games to produce a vinyl release of the game’s long-awaited soundtrack, as well as reissue a physical version of the PS4 game, which has largely sold out of new copies at retail.

The soundtrack will come in two flavors: a 2-disc set featuring 17 of the game’s most popular songs, and a complete, 5-disc limited-edition of all 40 tracks from Tetris Effect; both soundtracks will include a code to download digital versions of all 40 tracks as well. Pre-orders for the vinyl soundtrack will begin at limitedrungames.com on November 22. For prices and more info, please see below.

The Tetris Effect physical game reissue will feature revised reversible cover art (with special gold foil highlights on front) exclusive to Limited Run Games. It will be available for pre-order alongside the soundtrack starting November 22nd.

Finally, as a thanks to fans who have supported the game throughout its first year on sale, a new Tetris Effect Metamorphosis PS4 Dynamic Theme is now available to download for free from PlayStation Store in US and Japan (and should be available by November 21st in Europe and Asia). The theme is based on the final stage of the Journey Mode, voted by fans as the best level of the game, and features the popular song “Always Been But Never Dreamed.”

More details on all these items, as well as the latest patch for the Tetris Effect game on PS4, which adds new options and other extras, is detailed below. 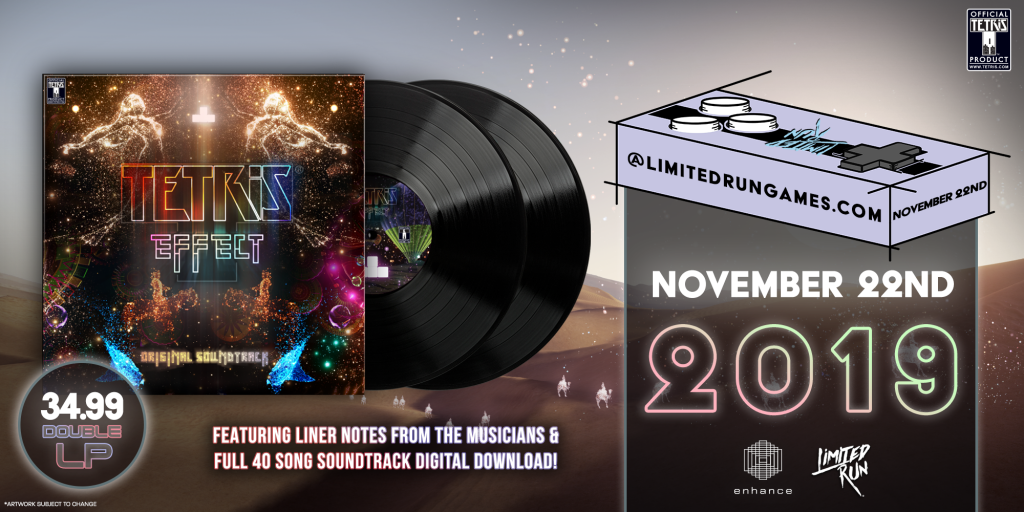 2LP Tetris Effect Original Soundtrack ($34.99) – A 2-disc vinyl record release with 17 selected tracks from Journey Mode and includes full mixes of fan favorite songs “Connected (Yours Forever)” and “World of Colors.” A download code for all 40 tracks of the game will also be included. Pre-orders open on November 22nd at limitedrungames.com and will be open for four weeks. 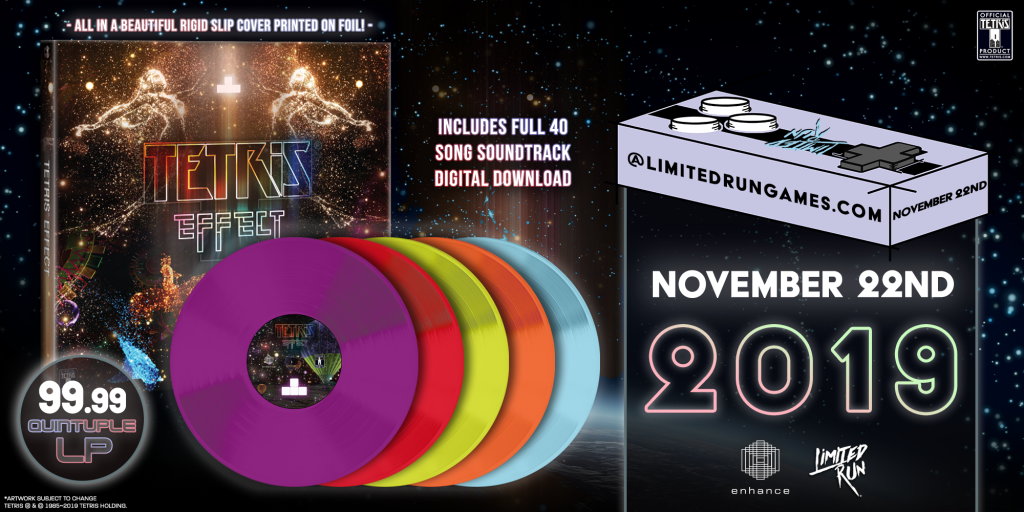 5LP Tetris Effect Original Soundtrack: Perfect Collection ($99.99) – A premium 180 gram 5-disc Tetrimino-colored complete vinyl collection of all 40 songs composed by Hydelic. This edition features liner notes by the director and composer and is packaged in a special slipcase with foil accents. A download code for all 40 tracks of the game will also be included. Pre-orders open on November 22nd at limitedrungames.com; as a limited-edition set only pre-orders will be guaranteed a copy.

DIGITAL SOUNDTRACK DETAILS
Timed to launch along with the shipping of the physical version before the end of Q1 2020, the full 40-song Tetris Effect soundtrack will also be available to purchase for download on Enhance’s official Bandcamp page. All vinyl purchases also include a free download code for the full soundtrack. 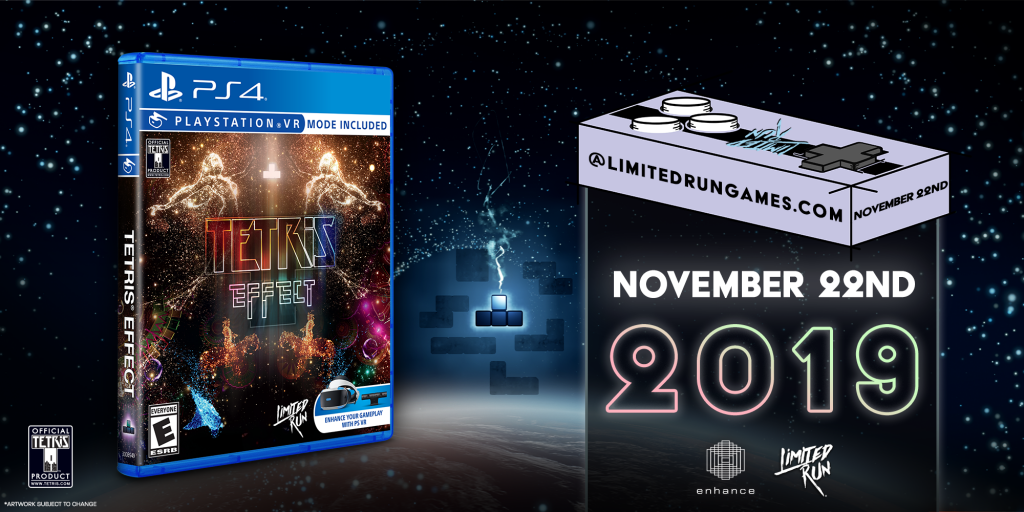 LIMITED RUN PHYSICAL PS4 EDITION DETAILS
($39.99 MSRP, $29.99 LIMITED RUN LAUNCH PROMO PRICE)
This reissue of the award-winning Tetris Effect features a reversible special-edition cover with gold foil on front and a revised design exclusive to Limited Run Games. Play it on either a PS4™ and standard display, or up to 4K and 60fps on a PS4™Pro, or optionally in PSVR. 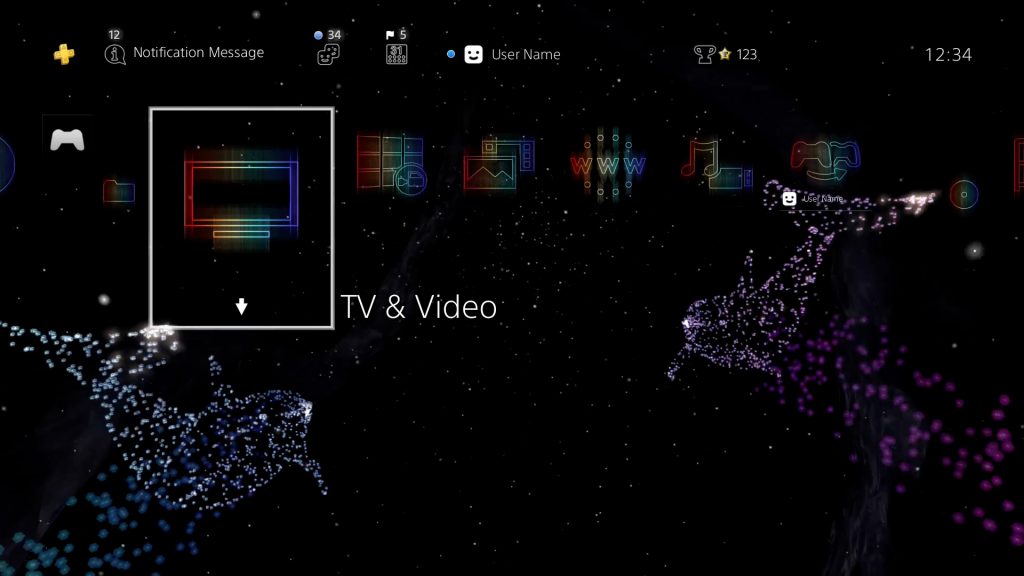 NEW PS4 DYNAMIC THEME DETAILS
Last summer, Tetris Effect fans voted on Enhance’s Twitter account to crown their favorite stage from the game, which went to the final level, Metamorphosis. Now, as a special thank you to fans on the 1st anniversary of the Tetris Effect game’s debut on PS4, a free PS4 Dynamic Theme is available to download from the PlayStation Store in the US and Japan (EU and Asia ETA 11/21).

TETRIS EFFECT FOR PS4 PATCH 1.09 DETAILS (11/12/19)
A new patch for the game adds a few fan-requested features and additional polish:

About Tetris® Effect
Originally released on PlayStation®4 in November 2018, the Tetris® Effect game was hailed as a breakthrough title by fans and critics alike, earning an 89 Metacritic score and 60+ awards and nominations from major outlets, including overall “2018 Game of the Year” honors from Giant Bomb and Eurogamer, and various “Best of 2018” awards from The New Yorker, Polygon, The Washington Post, IGN, GameSpot, The Verge, PlayStation Blog, and many more.